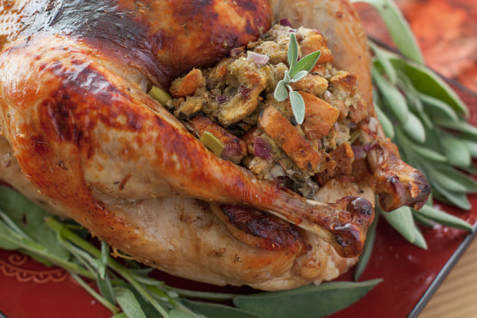 The term “stuffing” first appears in English print in 1538. However, the term “stuffing” was not delicate enough for Victorian England. Around the 1880s, they began referring to the act of stuffing a bird as “dressing.” To me, oyster stuffing (or “dressing” as it was called from the Victorian era) is one of the best parts of a Thanksgiving dinner.
​
If your family arrived in America before 1880, as mine did, you might call it “stuffing,” whereas those who came later, after 1880, call it “dressing.” In my family, just to confuse you, though we arrived in America before the Victorian era, we like "oyster dressing" and, from my research, I know they were stuffing their turkeys with it in England in the Regency era.

That is why in A Secret Scottish Christmas you’ll find the roast goose stuffed with, yes folks, oysters, bread, herbs and other things.

This recipe has been handed down from moms to their daughters in my family for generations. The oysters make the dressing moist and add a unique taste. It's not fishy at all, but unique. I've tried many other recipes for stuffing but I like this one best.

Ingredients
1 cup butter (can use less and also mix with Olive oil)
2 cups chopped celery
2 cups chopped onion
1 teaspoon thyme
2 teaspoons Poultry Seasoning
1 teaspoon sea salt (can use less)
1/2 teaspoon ground pepper
1 pint oysters, boiled in water and the oysters’ own juice (add just enough water to cover them) for 2 minutes. Then cool and chop.
12 cups dry unseasoned bread cubes (I make my own croutons the night before from egg bread and wheat bread. After I cut the cubes, I dry them in the oven on low heat)
Broth made from boiling the giblets

The night before:
The morning you cook the turkey:


Cook your turkey and enjoy! I typically use butter soaked cheesecloth covered with a foil tent to keep the bird moist and bake at 325 degrees until done (several hours… just look at per pound cooking times).
The Official Website of Author Regan Walker
© 2012 - 2021 Regan Walker. All Rights Reserved | Privacy Policy
Website by Potterton Creative