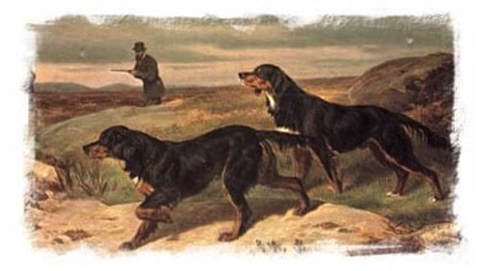 When the Powell twins, Robbie and Nash, first encounter Miss Aileen Stephen, the sister of their Scottish host, they are both taken with her and thereafter compete to win her heart. The first night, as they go down to dinner, they encounter her and her two dogs on the stairs:

This short scene is from Robbie’s point of view:

They began to descend the stairs just as Aileen Stephen came through the front door, her cheeks rosy from the cold. She let her tartan scarf fall to her shoulders, revealing a bounty of bright red hair. A tempting picture to be sure.
Two great black and tan dogs bounded in after her.
“Why, hello,” said Robbie, giving her one of his sincerest smiles. Beside him, Nash tensed, none too pleased at Robbie’s initiative.
His brother smiled at the girl. “What dogs are these?”
She looked up at them, her dogs wagging their long tails, their paws on the steps sniffing at Robbie’s feet. “Goodness and Mercy, a gift from the Duke of Gordon. He raises them on his estate in Moray to the north.”
Robbie stepped down to the entry hall’s stone floor and patted the head of the closest dog, a friendly sort, then returned his attention to the girl.
Nash alighted from the last stair to scratch one of the dogs behind the ear. “How ever did you come up with those names, Miss Stephen?”
“You may call me Ailie. Most everyone here does. You are Robbie and Nash?”
“I am Robbie and this is my brother, Nash,” said Robbie, gesturing first to himself and then to his twin.
Her beautiful face lifted in a one-sided grin as she glanced between them. “’Twill be difficult telling you apart. As for the names of my dogs, do ye nae ken yer Scriptures?”
Robbie exchanged a look with his brother. Neither, he was certain, had a clue as to her meaning, yet she had spoken in the way of the Scots, intentionally deepening her accent. Perhaps she meant to suggest Englishmen might be ignorant of the Good Book’s teachings.
“The twenty-third Psalm ends,” she recited, “‘Surely goodness and mercy will follow me all the days of my life…’ aye?”
“Clever,” said Nash. “I won’t be forgetting their names any time soon.” From the admiring look Nash gave the girl, Robbie surmised his twin wouldn’t be forgetting her either.
Robbie returned his attention to the large lean dogs he decided were setters, but not the black and white speckled ones he was used to. These two were mostly black with small bits of copper and white trim. “I can scarce see a difference between them.”
Her brows lifted. “This from two brothers who are made from the same mold? Really, ’tis easy to tell them apart. Goodness is the male and Mercy is the female.”
“My brother’s a bit slow,” muttered Nash.
Robbie shot Nash a look of annoyance. “Seems I recall you accusing me of being too fast, Brother.”
Nash coughed into his hand. “I was speaking of understanding just now, not your manner of living.” Then to Ailie, “Please excuse my brother.”
“I always make excuses for English rakes,” she said matter-of-factly.
Robbie sputtered. Beside him, Nash appeared bemused.
“If you’re looking for the others, I believe they are in the parlor. Just there.” She gestured to a set of double doors. “I will join you shortly.”
Robbie watched as she proceeded to a door to the right of the stairs, the dogs following on her heels, as the psalm suggested they would.
He turned toward the parlor. “I believe we have been dismissed.” Then, in a low voice, “Now there’s a tempting armful and, for a green girl, most interesting. A sharp tongue, perhaps, but interesting nonetheless.”
“She’s not one of your ‘women on the town’,” said Nash, looking over his shoulder as Aileen Stephen and her dogs disappeared through the door. “She’s a spirited innocent. I find her… enchanting.”