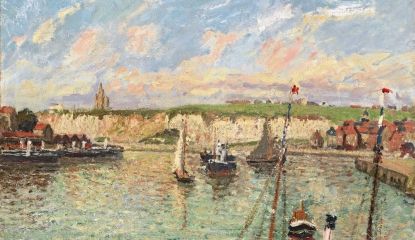 Excerpt from To Tame the Wind... Claire awakes in Dieppe.

The door of the carriage swung open, a gown was tossed into her lap and a broad shouldered man filled the opening.
Claire’s jaw went slack while her heart kicked into a gallop as if responding of its own accord to the first man to stir it from slumber.
“Bonjour, Mademoiselle Donet,” he said in French. “Captain Simon Powell.” He bowed in grand gesture. “Your humble servant with something for you to wear.”
The golden one. It had been nearly two years since she had seen him, but she had never forgotten the night of the masquerade. She had never forgotten him. Though the linen shirt stretched tight across his broad chest and the leather breeches and boots he wore now were a far cry from the shimmering costume he’d worn then, his amber eyes were the same. Impossibly, he was even more handsome that in her faded memory. In the last two years, he had never been far from her thoughts, for the night she’d first seen him—and imagined a man’s pleasure—was the night Claire’s girlish dreams had ended forever.
And now he’d returned to France and abducted her.
He leaned into the carriage and untied her feet, then her wrists. The touch of his rough man’s hands on her skin sent odd chills rippling through her. She bit her lip, shamed by her body’s reaction to this stranger. Her living temptation turned away for a moment, then faced her, a cup in his outstretched hand. “’Tis only water,” he said when she was reluctant to take it.
Too grateful to complain, she hastily brought the fresh water to her dry lips and drank her fill.
“I’ll give you some time to dress,” he said not unkindly. His eyes shifted to her blanket-covered nightclothes. “I wouldn’t want my men to see you as you are.”
Claire felt her cheeks burn at the thought.
“The gown is modest enough to please even your nuns,” he said. “Call me if you need… ah, assistance. I will be just outside.”
She fumed at his insolence, at his actions that had placed her at his mercy. Though she knew he was English and a privateer, she had no idea why he had taken her, and she would wait no longer to learn the truth of it. “Why did you bring me here? Why did you take me from the convent?”
Leaning one arm against the frame of the carriage, he regarded her intently, his eyes like chips of amber.
“You have your father to thank for that, mademoiselle. As soon as he returns what is mine you will have your freedom.”
Claire blinked. “My father?” Her voice sounded to her like the pleading of a feeble schoolgirl. She would not be cowed! She lifted her chin, confident in his error. “What has he to do with this… this perfidy? Papa is a man of business and letters, a man of some wealth. He has no need to steal!”
His mouth twitched up in a grin, drawing Claire’s gaze to his sensual lips, reminding her of a night when she had seen him use those lips to good effect. She scowled, angry with the rogue and with herself for finding him so attractive.
He shut the door of the carriage and peered in through the open window. “Your father, mademoiselle, is a pirate.”