Set in late 13th and early 14th century  Scotland, Bound by Honor, book 2 in The Clan Donald Saga, is the remarkable story of the friendship between Angus Og Macdonald, Lord of the Isles, and Robert the Bruce, King of Scots. ​It's my longest work for which I did hundreds of hours of research. The story spans nearly 30 years. 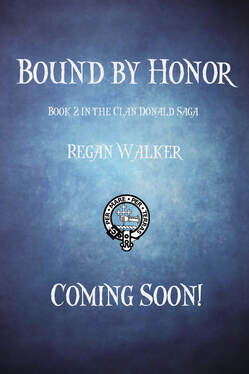 In the waning years of the thirteenth century, two young noblemen form a bond that forges their destiny and that of Scotland’s. Their shared pledge of honor would endure for a lifetime to secure power in the Isles for Angus Og Macdonald and a crown for Robert the Bruce. This is the story of their friendship, their times and the battle that secured their future.

Standing beside them would be two women from Ireland, Aine O’Cahan, the dark-haired beauty from Ulster, who captured the heart of the Lord of the Isles, and Elizabeth de Burgh, the fair Norman heiress who stood by her man, King Robert Bruce, though it would cost her dearly.

Enter the exciting world of medieval Scotland and live the adventure!

The background photograph of Loch Voil at Balquidder by Robert Gibb is used with his permission; and the banner image of the Isle of Skye by photographer Kenny Muir is used with his permission. My thanks to them both!
The Official Website of Author Regan Walker
© 2012 - 2021 Regan Walker. All Rights Reserved | Privacy Policy
Website by Potterton Creative