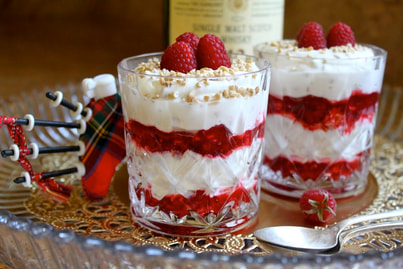 Cranachan is a traditional Scottish dessert served at the Stephens in Arbroath in A Secret Scottish Christmas. Today, it's usually made from a mixture of whipped cream, whisky, honey, and fresh raspberries topped with toasted oatmeal. But in the Regency era, whisky was the equivalent of moonshine and the upper classes would have used brandy if they wanted to make it with liquor.

Some of the best raspberries in the world are grown in Scotland, but in winter, bottled and preserved raspberries would be used. Today you can use frozen raspberries out of season, of course. If no cream was available, a traditional cream cheese called Crowdie was used.

A traditional way to serve the dessert is to bring dishes of each ingredient to the table, so that each person can assemble their dessert to taste.
Ingredients
Instructions Refrigerate until ready to eat, but take them out about 20 minutes before serving, for better flavor.