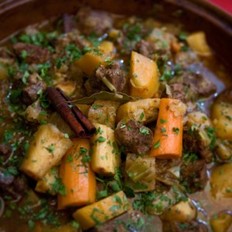 While we have no surviving recipes from the early Saxons (or English living in North England), we do know what they ate. They would have roasted meat (cow, sheep, fowl, wild rabbits, birds) over an open hearth fire or cooked it in a pot. Though they were primarily vegetarians they did eat meat. Sheep were raised for their wool and meat. And they raised chickens for the precious eggs.  They also caught fish from the rivers. Stews would have been frequent fare.

In my story The Red Wolf’s Prize, a medieval set in England in 1068, two years after the Conquest, the people at Talisand in the north on the River Lune eat rabbit stew, fish and, of course, lamb. Into their stew would go the vegetables (carrots and other root vegetables and peas), herbs and spices and perhaps honey. Saxons did not have potatoes, but you can add them to the recipe below.

(Note: The lamb stew served by McGinnes, the Irish cook in Wind Raven did have potatoes, but that was in 1817!)

The English at Talisand ate their stew from wooden bowls using spoons. Here’s the recipe for Mutton (or lamb) stew that Maggie, the cook at Talisand, served after the Normans arrived in The Red Wolf's Prize:

Wash and chop the vegetables and set aside
Roast the lamb or (they did have skillets and you can sear the lamb pieces in 2 TBS. of olive oil until browned)
Put the browned lamb in a pot with 4 cups vegetable broth

Then add:
Leeks
Onions
Carrots
Peas (can be added later, too, if you don’t like them too cooked)

Cook for one hour. If you’re adding potatoes, add them at the end of the hour and cook another 30 minutes
Add spices (1 Tsp. each: cumin, bay leaves, thyme and salt to taste)
You can also and add 1 cup red wine during the last half hour (the Normans brought it, of course)
And you can add 3-4 tsp. honey (the Saxons had this!)